(Continuing my companion piece to “Messianic Quintet” which began with the article “Hijacking Messiah”.) 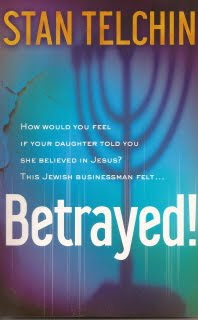 In his book Betrayed, Stan Telchin describes how horrified he and his wife (both Jewish) were when their daughter revealed she had found faith in Jesus. He writes “To mention the name of Jesus is awkward enough. To consider Him as the Messiah is to betray our people, to join the enemy and to desecrate the memory of all our ancestors over the last two thousand years”. He continues with the reason for this: “…the knights of the Crusades…descended on Jews with a cross in one hand and a sword in the other. They murdered and raped and pillaged, all in the name of Christianity.”
“Then there was the Inquisition in Spain in 1492, when refusing to convert to Christianity would cost a Jew his life…”

The realities of a 2000 year history of persecution are not easily brushed away. And it is not distant history when we recognise how recently 6,000,000 Jews were added to the number of those murdered in previous vendettas of “Christendom” against the Jews. However Telchin didn’t need to look to history, even recent history, to make the point recalling, at the age of 5 or 6, of being labelled a “Christ-killer”. 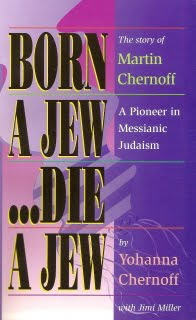 Yohanna Chernoff in Born a Jew…Die a Jew reveals another reason Jews have found it difficult to accept the gospel: the fear of losing or forfeiting their cultural identity. What other national group have been required to abandon or hide their cultural roots? Do Americans stop being Americans after coming to faith in Jesus?
Jewish believers faced rejection from two sides – from other Jews who see belief in Jesus as betrayal, “Are you going to become like those people who have been persecuting us for two thousand years?” And from gentile believers, who foster barely disguised anti-Semitism in their expectation that Jews give up their Jewish identity.
This has been expressed most clearly in replacement theology which insists that the Jews are a people rejected by God having been replaced in His affections by the church.

Yohanna Chernoff and her husband Marty were among the recent pioneers of a movement among Jewish believers in which they celebrate their Messiah as Jews. They started one of the earliest successful Messianic Congregations in America, with the mission of taking the gospel to Jewish families and bringing them into an expression of Messianic faith that joyfully embraces its Jewish roots. This mission not only brought opposition from more traditional church groups, it attracted massive protests from orthodox Jewish groups. This story is told in the book Born a Jew…Die a Jew.

Prior to the late 1960s/early 1970s, there were few Jews expressing faith in Jesus the Messiah. This was the time of the “Jesus Movement” through which many young people started to find the Christian message appealing. This influx of young people, often from the hippy community, also affected the new Messianic fellowships. The Chernoffs saw this as the fulfilment of a vision received by Marty which referred to a “ragged righteous remnant”. Their Beth Yeshua (House of Salvation) fellowship gave a spiritual home to many young people searching for truth and was the birth place of Lamb and Kol Simcha, two groups of singers/musicians who introduced popular, Jewish influenced music to the wider church.

While many still insist that God has rejected Israel and replaced them with the church –thought of as “new” or “spiritual” Israel - they cannot honestly deny that a wonderful move of God has begun within the Jewish people. The numbers of Messianic Jewish believers has grown significantly over the last 30-40 years. Even so, while acknowledging this fact, many still insist that there is no future for the people of Israel. And in this insistence there is not only a denial of what is happening around them, there is a wilful denial of what the apostle Paul reveals in his letter to the church in Rome. His words should take away ALL doubt. He categorically states that God has not rejected the Jews, and he is equally categorical when he states that ALL Israel will be saved in the same way that gentile believers have been saved. This will happen after an unspecified number of gentiles have come to faith.

Don Finto’s God’s Promise and the Future of Israel brings an overview of what God has been doing among the descendants of Abraham, Isaac and Jacob. It gives a perspective of the history of Israel and the church, and moves on to the future that both will share together, becoming members of the one family of God. He writes of the important part that Israel plays in God’s future purposes, a future in which the Messiah will return to earth to establish the Kingdom promised throughout countless prophecies in scripture.

Finto believes that the coming of this Kingdom is very near. The re-establishment of Israel in 1948 and the subsequent repossession of Jerusalem as its capital in 1967 are seen as major signs of the imminence of the Kingdom. Could these events be fulfilment of the return of Israel foretold by the old testament prophets: a return from ALL the nations (clearly a different event from the return from ONE nation after the exile to Babylon)? Those prophecies also promise that the people returning to the land of their ancestors will never again be uprooted – again the return from the Babylonian exile does not fulfil that condition considering they WERE uprooted again in 70AD.

Is it coincidence that Jerusalem came under Jewish control and an increase in the number of Jews recognising their Messiah started around the same time?
Posted by Onesimus at 3:37 pm

They all look like excellent reads. I look forward to finding them.

Have you heard of Sid Roth? He is a messianic Jew who has written a book called "One New Man" and he also has written a book that is being sent to Jews all across America. I believe it is called "They thought for Themselves". It is from one Jew to another trying to reach His people for the Messiah. I have not yet read either but sometimes follow his ministry. You might check it out. He also hosts the show called "It's Supernatural".

I have heard of Sid Roth, but I have been given the impression that he is not the most discerning of men.

When I get the time I'll have to check him for myself.

I have ordered another couple of books on this issue, whihc I hope to receive before too long.

This series that I have been writing has at least one more part to come - and I also have to do something about the reviews for my other blog which I haven't started yet.
This series of articles were supposed to be reviews for that blog, but they outgrew thier intended purpose.

I came across your blog through curiosity (nay, admiration) at your no-nonsense rebuttal of a denominational zealot on another site. And when I find GODthinker here too I know I am in good company!

Which of the many books on messianic Judaism you mention would you recommend as a starter? The subject has drawn me to the point where I am questioning some of my traditional 'Presbyterian' takes.

G'Day Philip,
It's hard to pick one book because they have all added something to my understanding.

But if I had to make the recommendation I'd perhaps say the Don Finto book. It gives a broader view of what is going on rather than the personal perspectives given by others.

I also have added a couple of links to sites I have found interesting in the sidebar of my blog.

G’Day again Philip.
Adding to what I said above, I have some more books on order that should cover this same topic.

I have also received feedback from a Jewish friend and brother who I asked to comment on my two “messianic” articles. He was one of the original members of the Chernoff’s Beth Yeshua fellowship mentioned in Yohanna Chernoff’s book. It will take a while to read through the information he sent me.

My interest lies with the continuing role of Israel in God’s purposes. Messianic Judaism is one expression of what is happening within the Jewish community and like any other part of the church the Messianic Judaism movement has its extremes and its errors. I suspect some of those extremes are the “equal and opposite reaction” in response to the anti-Jewish attitudes perpetuated within (and through) the church for over 1700 years.

I want to write another article on the topic to tie this all up from a scriptural perspective.

Thanks, ONESIMUS, I'll chase up the Don Finto Book, take a trip round your links and wait with interest for your next blog.

Hi Philip,
My main reservations about Finto and his books (I received another one yesterday)are some of the people who he seems to be associated with. They include people involved with some of the more questionable aspects of the charismatic movement.

However, I still found the book to be very useful in giving an overview of the topic of the Jewish/Israel relationship with the church and prophecy.

As with all "christian" books it would be an advantage to be blessed with an extra pair of eyes so we can keep one eye on the book and three eyes on scripture.