The deadline for the predicted Christchurch disaster has passed without the promised destruction.

Reports from Christchurch reveal that many stayed away from work and left the city for the day. Many school students didn’t attend class. Many were in fear of what could happen on the day.
Remember, this is a city that suffered terrible destruction and loss of life at the beginning of the year; where constant aftershocks are a reminder of what happened. Most citizens suffered personal loss or at least know someone close who did.

What has happened since the failure of the “prophesied” destruction on the 28th?

1) Some have taken the predicted route and claim credit for their intercession averting the disaster.
2) Others continue as if the failure presents no real problem and they stick with their view that Christchurch is due for another disastrous “shaking”, that only the timing was wrong
3) Some (praise God) have confessed to their error and are seeking God, genuinely repentant for their involvement.

One factor that clearly helped the Christchurch prediction to be circulated as “prophecy” was the preconceived idea that God intended to judge Christchurch, or at least the “disobedient church” in Christchurch.
Were these expectations being voiced PRIOR to the two major quakes, the second of which led to massive loss of life? Or were these “prophetic” voices informed BY the two quakes – Prophetic “insight” AFTER the fact? Is this why so many latched onto the false 28 September prediction? They saw it as a validation of their own alleged prophetic insight?

Is that the way God acts? To cause death and massive destruction among unbelievers to punish disobedient believers?

Do we kick the dog to punish the cat that has torn the curtains? Maybe we do – but would a God of justice do that?
Posted by Onesimus at 1:53 pm 3 comments: 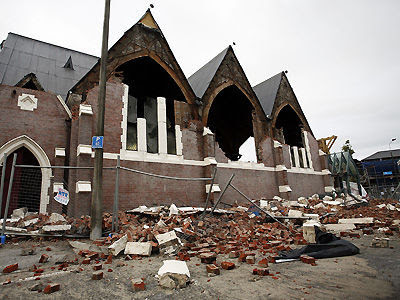 One of the most maligned spiritual gifts is prophecy. It is either dismissed as being obsolete or it is approached so casually that it is not surprising many people have convinced themselves that it is obsolete.

An example of how little REAL respect is given to prophecy is being demonstrated as I write. A prediction has been made of yet another catastrophe in Christchurch New Zealand. That city seems to draw attention from a sector of the “church” which delights in the idea of God pouring out His wrath on other people. Christchurch seems to be a favourite target for a few reasons. It has already been the victim of disaster and its name makes it a handy metaphor for those critical of the state of the church. Put the two together and we have God showing His displeasure with Christ’s church.

The current prediction has been very specific – giving today as the day when terrible things will happen again to the city. It has had a polarising effect within the Christian community. Some reject it out of hand because they reject the validity of all present day prophecy. Others have embraced it without question, appearing to take delight in the idea of God’s judgement being demonstrated against others.

I take a different view. I am totally accepting of the validity of prophecy today but I strongly reject this particular prediction. I find nothing in it to indicate it is a true prophetic word.

Yesterday, 27th September, I resigned from my role as the moderator of a Christian forum because of the way this prediction was being addressed. As a result I have been asked not to contribute to that forum for three months.

It is clear that the forum owner accepts the validity of the prophecy in part. The only aspect that troubles him is the dating of the predicted disaster. A few other members have been more supportive, accepting all of it as a true message from God. They expect disaster to strike Christchurch today. Maybe even more disturbing than this expectation is the impression that they won’t even have their certainty shaken when the predicted event fails to happen. They will merely latch onto the next “word of prophecy” and run with that one until it also fails.

These people are more than willing to see Christchurch take the brunt of God’s wrath because of the state of the church (as they see it) and yet they are blind to the fact that THEY are no less disobedient, wilful and misled. They are no less guilty of error and stubbornness –all demonstrated by their refusal to test the “prophecy” according to God given, scriptural principals.

Prophecy is something that we can not afford to take lightly. We can not be casual with it. In the Old Testament false prophets were given no leeway. According to God’s instructions, they got it right – or they lost their lives.

Today false prophets are not faced with stoning. Some may see this as God’s mercy at work. I see it slightly differently. Maybe the Old Testament way was more merciful – it made people more aware of the seriousness of saying “God said” when God had said nothing of the kind. Maybe the freedom for “prophets” to speak without immediate consequences is itself a judgement on the church, separating the wheat from the chaff, separating those with a love and desire for the the truth from those who prefer baseless sensation.

There are still several more hours of the 28th (NZ time) to go. As yet I’ve heard no news of destruction in Christchurch. I’ll stick my neck out a little right now and say the rest of the day will pass with a similar absence of news, and then tomorrow the excuses, self-justification and back tracking will begin: anything to avoid accountability for the lies that have been promoted and supported.
Posted by Onesimus at 3:54 pm 9 comments:

Could You Become False Prophet or Teacher?

False teachers/prophets start somewhere.
I’m not sure that total non-believers decide that preaching is the best way to fame and fortune and start up their own ministry.

Their journey starts with them being led into error. They start off deceived and later become a deceiver through the encouragement they receive, firstly from those they respect and admire and later from the followers they accumulate. They become motivated and led by the praise of man instead of testing their way by the word of God.

One of the clearest indications that someone has become a false prophet/teacher is their refusal to face their mistakes and failed predictions with REPENTANCE. Instead they will either make excuses or they will ignore and refuse to acknowledge their error.

All of us at one time or another can make mistakes – the thing that separates the mistake from the false is the action taken when the error is made evident.

If we take the “cover-up” or denial path we are taking our first steps along a very dangerous route where we will not only be held accountable for ourselves, but also for the damage done to others.
Posted by Onesimus at 10:06 am 1 comment: 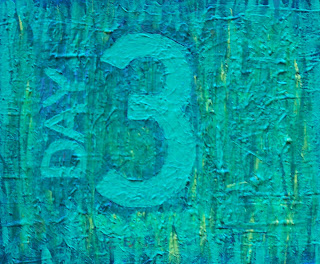 Posted by Onesimus at 3:51 pm No comments:

Paintings by Gloria, the words of Jesus on the cross: 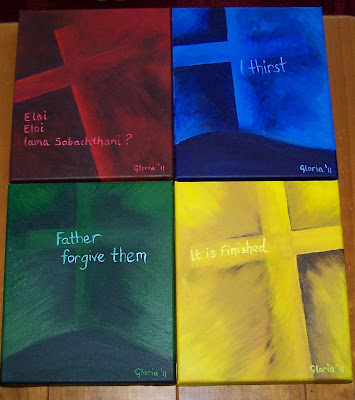 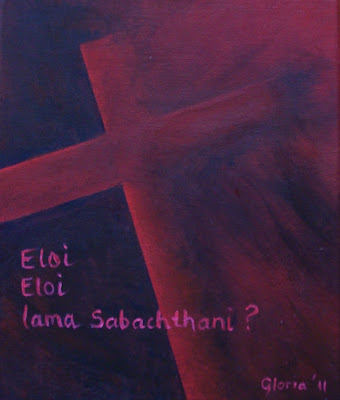 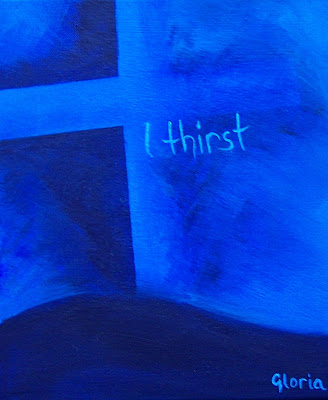 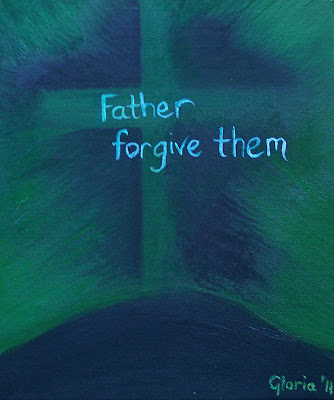 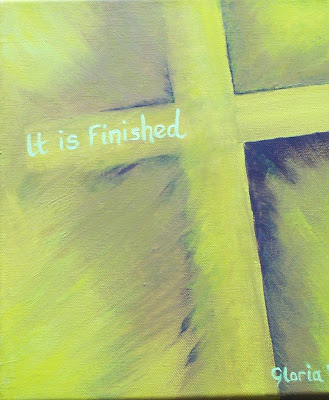 Those who are exceptionally observant may notice differences between the red Eloi painting here and the one illustrated on an earlier post. Gloria painted a new version of this painting to complete this series and sent the original to a highly valued friend.
Posted by Onesimus at 9:31 am 1 comment: