My friend Chris paints scripture. He is the one who encouraged me to start doing do the same.

He believes that scripture in art can access places and reach people where scripture would not normally be read. His paintings are displayed in doctors’ surgeries, hospitals, shops and in private homes.

He is the one who introduced me to the art of Colin McCahon .

These are examples of Chris’s work. 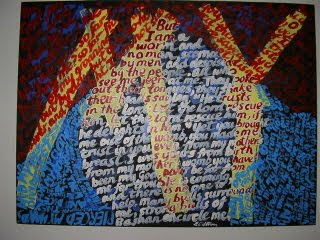 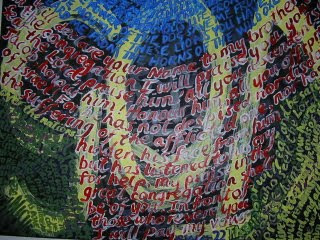 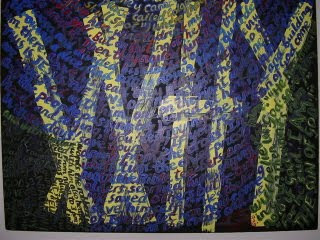 Posted by Onesimus at 9:31 am No comments: 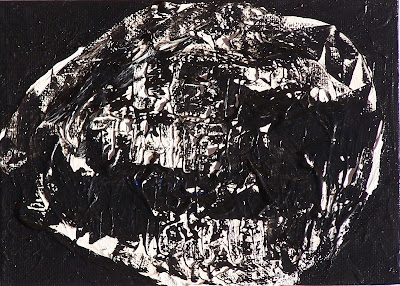 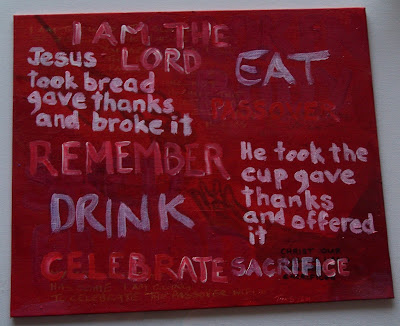 The photo above was taken with a flash. The following was taken in natural light. 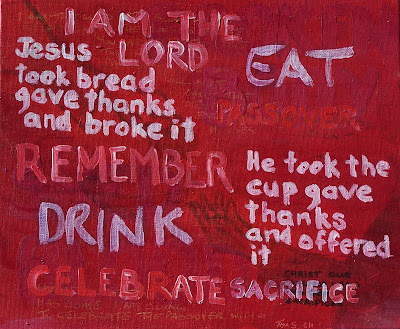 Déjà vu all over again!

One thing that is continually being made clear is how often people will take a brief excerpt of scripture, interpret it, and base their theological understanding on their interpretation of that brief excerpt.

Yes, this is another rant about context.

Blindness to context is one of the major factors contributing to false doctrine and false teaching in the church today.
Posted by Onesimus at 9:35 am No comments:

Yesterday I saw the most powerful artwork I’ve ever seen: Colin McCahon’s “Victory Over Death 2”.

I was at the National Gallery of Australia in Canberra and I lost interest in everything else I saw after it. It left me trembling and too emotional to speak.

It was painted on a huge loose canvas. The words “I AM” dominated the work, and portions of bible verses are scrawled on various panels of the canvas.

When I got home I had a quick look at some articles about McCahon that I downloaded from the internet. I read that the painting had been given to Australia by the New Zealand government and that the Australian press had treated the gift with derision and mockery.
An article included a copy of a cartoon mocking the painting’s “I AM” statement.

I confess that after seeing that cartoon I felt like a third Boanerges, wanting to call down fire from heaven in judgement.

Information about the painting can be found here:

An image of the painting can be found here:

Two of the proof texts favoured by the promoters of replacement theology are:

Rom 9: 6-8 For not all who are descended from Israel are Israel. Nor because they are his descendants are they all Abraham's children. On the contrary, "It is through Isaac that your offspring will be reckoned." In other words, it is not the natural children who are God's children, but it is the children of the promise who are regarded as Abraham's offspring.

But to use those texts as support for their theology, the replacement promoters need to totally ignore the clear context of their proof texts.

Go back several verses and you will read in verse 17:

“ Now you, if you call yourself a Jew; if you rely on the law and boast in God…”

It is specifically addressed to Jews who were trusting in their blood heritage and their relationship to the law. Paul was saying their heritage was not enough. It was not addressing gentiles and saying they have been made Jews through "circumcision of the heart". It was addressing Jews, saying that MORE than heredity and law observance were needed to be part of God’s people. An inward change worked by the Spirit is necessary.

When Paul writes “not all who are descended from Israel are Israel.” He is referring to a faithful remnant of the descendants of Abraham Isaac and Jacob.

It pinpoints the faithful remnant AMONG the descendants of Abraham, Isaac and Jacob. It is not transferring attention outside of those descendants.

It's like saying that not all born into a Christian family are Christian - only those who have their own faith in Jesus.
Posted by Onesimus at 10:33 am 7 comments:

Israel the nation wiped off the map: what would it mean?

On a forum I frequent someone asked:

“Lets say hypothetically Israel the nation was wiped of the map. What would that mean to everyone?”

This is my answer to that question:

It should mean nothing to those who look to the truth of God's word instead of to the world's political map.

Their long absence from the map is one of the reasons for the creation of replacement theology. With Israel gone, the church needed to give meaning to the many scriptural promises made to Israel, so they assumed that the church had replaced Israel in God's plans.

They overlooked the clearest meaning that Israel's existence did not depend on man's political "realities", but on God's promise. And HIS promises are kept and fulfilled according to HIS timing.

So even if the present day political nation of Israel is wiped off the map again, it would merely mean that Israel will be restored to the land again at some future point in accordance with the prophetic promises given by God.

We should not confuse today's political nation of Israel with the Israel of God. God's Israel takes into account people descended from Abraham, Isaac and Jacob no matter where they live. Despite the creation of the nation state, the majority of Israel remains in exile. One day that exile will end and God's Israel will be totally returned to the land He promised them and they AS A COMPLETE NATION will recognise their Messiah, Jesus and will enter the new covenant through faith in Him.
Posted by Onesimus at 1:00 pm 8 comments:

A Radical Step to Church Transformation.

Five Steps to Transform Your Church in Seven Months, Guaranteed


Five Steps to Transform Your Church