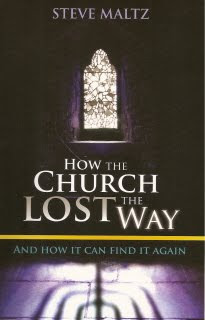 On my “literary” blog I will be posting an article called “Messianic Quintet”. It will briefly “review” five books with a common theme that I’ve been reading recently.

Three of the books are autobiographical while the other two offer personal observations of influences that have separated Christianity from its Jewish origins. This article is a companion piece, touching on the historical background of the relationship between Christianity and Israel. Following articles will look at the direction ahead.
This is a complex and potentially controversial issue I hope I’m able to address it with a degree of clarity and not merely add to the misunderstanding. Of course there is no way that the whole matter can be addressed in full and I can only touch the surface.

For the first decades of church history, the Christian faith was predominantly Jewish. It was not considered to be a new religion. Its followers recognised Jesus as “the Messiah”, the King of Israel, whose coming had been prophesied for hundreds of years.

Eventually, the message of the Messiah spread to a non-Jewish audience. The original followers of Jesus then had to decide whether it was necessary for the growing number of gentile followers to convert to Judaism, adopting its laws and traditions in order to be accepted by God.

Moving forward a couple of centuries and the nature of the church had changed significantly. The gentile influence had increased, far outweighing that of Jewish believers.

When the council of Nicea met in 325AD (during which some of the basic Christian beliefs were established as recorded in the Nicene Creed) they excluded all Jewish input. No leader from a Jewish background was invited to attend. It wasn’t long before all influence from Jewish believers was rejected.

The early Jewish leadership of the church saw that gentiles could become followers of Jesus without converting to Judaism, but when gentiles became the dominating influence the same liberty was not extended to Jews. They were expected to desert their Jewish culture and adopt gentile behaviour and lifestyle. It was forgotten that the Jesus at the heart of the church was Himself a Jew who had been proclaimed as King of the Jews.

For the most part of the last 2000 years, Jews have suffered at the hands of those professing to be Christians. “Christian” nations have treated them with scorn and violence, from the Spanish Inquisition, to the Russian Pogroms and of course the Holocaust, during which 1/3 of the world’s Jews was murdered by Hitler’s Nazis. These experiences throughout history contributed to the further hardening of the Jews against the Christian message.

During the church’s first years, prior to the coining of the term “Christian”, believers in Jesus called their faith and lifestyle “The Way” and considered themselves followers of The Way.
Steve Maltz has used this name in the title of his book How the Church Lost the Way. Throughout the book Maltz demonstrates how the Hebraic influence of the original followers of Jesus was replaced by the influences of Greek philosophy and how the acceptance of Jews within the church was ended.
I mentioned the council of Nicea earlier. Of this Maltz writes:

“…the first great Council of the Christian Church now takes a sinister turn and validates a policy that is going to result in nothing less than persecution, leading to genocide, of the Jewish people for centuries to come.”

This statement relates to an official letter circulated from the Council by the Emperor (and chairman of the Council) Constantine regarding the distancing of “Easter” celebrations from the original celebration of Passover, when Jesus was crucified according to the Jewish calendar.

“…it seemed to everyone a most unworthy thing that we should follow the custom of the Jews in the celebration of this most holy solemnity, who, polluted wretches, having stained their hands with a nefarious crime, are justly blinded in their minds…Let us therefore have nothing in common with the most hostile rabble of the Jews.”

Maltz continues, that this was “… the start of a long slide away from the Jewish roots of the faith” and notes that subsequent councils, “threatened excommunication for any Christian celebrating Passover with the Jews…” and “…extended this to all Jewish festivals as well as the Saturday Sabbath”.

In so clearly and categorically rejecting the Jewish origins of faith in the Jewish Messiah, the church did incalculable harm to itself and the integrity of its doctrines and practices. But also it did great harm to the Jew’s relationship with their long awaited King, helping to further harden them against Him and the message He preached.

(see Messianic Quintet
Posted by Onesimus at 10:10 am

After writing the above, I came across the following:

This article goes into much more depth and covers the issue much more effectively than my own attempt.

Nicea didn't establish beliefs: everything it taught was pre-existing teaching. The Jewish origins of Christianity are still clearly seen in the life and liturgy of the Eastern Orthodox Church.

I suspect the majority of Jewish believers would disagree with your last statement.

Nicea brought some kind of official recognition to many things that had been taught before and also determined that some pre-existing teachings were heretical.

That council gave official "legitimacy" to what should or should not be taught - what was considered legitimate Christianity and what wasn't.

Christianity's Jewish roots are clearly one of the things that were deemed unacceptable.

It is so refreshing to find another Christian believer who cares about thiese things. I think it is vital to know about this as we approach the end times. Our faith is to provoke the Jews to jealousy. How can we ever do that if what is taught in our churches is that we have no need for the Jewish origins of our faith? Jews that I know think Jesus is the Messiah of the gentiles because of how Christians have treated them. They cannot fathom that He is their own Messiah because of how Christians reject them, the Torah, and especially the Sabbath.

Thank you so much for the suggestion to read the article you linked to. It was amazing! I am excited to see how God is moving for reconciliation.

I also love your common sense approach to your comments that you include on this blog and on others that we mutually follow.

I saw that you are into Australian wines. Any recommendations that I could get here in the states?

As for wines:
There are two large family owned wine companies that I like. They are Tyrrells and Yalumba (website details below).
They are quite cheap here and I'm never disappointed with them. I recently tried Tyrrell's Pinot Noir and it was excellent.
We made the bottle last over three meals (between two of us)- just to stop accusations of me being a "wine-bibber".

I also like to support my town's local wine makers. There are several local vineyards and wine labels which are probably not available in the States (links on my other blog "Where the blogs have no name").

GODthinker,
Many years ago I had a strong interest in Israel – though a lot of that was more fuelled by romanticism than by revelation from scripture.
I remember reading and being impressed by Leon Uris’s book Exodus, a fictionalised account of the events of 1948 and I developed the dream of living on a kibbutz. (I SAID it was fuelled by romanticism!)

Time passed and my views changed, and eventually I grew annoyed with Israel and its treatment of Palestinians. AGAIN, my views were not shaped by scripture but by the media – a BIASED media.

It is only within the last year or two that I started to see what scripture has to say about Israel’s future in God’s purposes. Like many Christians I had neglected the Old Testament and the prophets in particular. So I missed all of the revelation they contained about Israel.
The parts I did know had always been interpreted through a bias that I now recognise as “replacement theology”, where any OT blessing was immediately applied to the church without taking into account its original and intended application to Israel. In doing that, Israel’s continuing importance to God is ignored and dismissed.

While this has many effects, there are two that I would like to point out. By distancing ourselves from Israel and the Jew, we deny ourselves important insights into scripture that can only be gained through an application of a Hebraic viewpoint. In its place we have substituted a Greek philosophical view that gives a totally wrong understanding of the spiritual vs. the material.
The second relates to the future. It’s not surprising that most who deny Israel also deny the coming 1000 year reign of our Lord. Replacement theology and amillenialism seem to go hand-in-hand.

I am still looking into this issue and have not yet come to any firm conclusion, but I wonder about Jesus’ statement: “this gospel of the kingdom will be preached in the whole world as a testimony to all nations, and then the end will come”.
What place does His earthly, 1000 year Kingdom have within that “gospel of the kingdom”? We have been given the impression that the “kingdom” being referred to is entirely spiritual (the effects of Greek philosophy again!) but how would this be understood from a Jewish perspective?