Some thoughts about the last decade and the "millennial" year that started it.

2010.
I recall a film of that title, the sequel to 2001 A Space Odyssey. I think it was made in the mid 1980s and it gave a very “optimistic” outlook for man’s progress as a space travelling species. But then again, in the world Arthur C Clarke created for that series of novels and films, mankind was being helped along by a mysterious alien race represented by a large matte black monolith.

Is it mere irony that a similar featureless block is the focal point of the prayer room in the United Nations building? As members pray to their various gods they kneel or sit facing the block and are able to use it as a representation of the god to whom they are praying. A featureless block intended to be inoffensive to the variety of religions followed by the diverse membership of the UN. In other words it was a compromise solution which showed no favouritism to any of the millions of gods worshipped by man.

2010. A year that was given little if any thought for most of my life. It lacks the mystique of the year 2000, that false millennial year (A C Clarke got the timing right with 2001).
2000 was a year I dreamt of as a child. A year so far away I couldn’t imagine reaching it. After all I would be 42 if the world (and I) survived that long. Be aware that my childhood saw the Vietnam War, the threat of nuclear annihilation, the first seeds of terrorism, with both Islamic groups and the IRA starting their campaigns…
The world didn’t seem such a friendly place and the future seemed… well, unlikely.

But that most anticipated “millennial” year did arrive and I was here to see it. A year celebrated with the Olympic Games literally on my doorstep, the Stadium visible from the street outside my home. People stood in the streets to watch one of the firework displays that have become part of Sydney’s identity. It was the cities second major celebration for that year.
The first was to openly welcome the "millennium".

A whole decade has now passed. 10 years more than my childhood imagination could reach and what has the world learned?

Well, it has learned to change fiction into fact, taking the example of Clarke’s fictional world the leaders of the “real” world also turn to a featureless block for enlightenment. And while their representaives pray to that idol, visitors to the building containing it can see another monument at its entrance. One that speaks of beating swords into ploughshares and about man learning war no more… surely an admirable goal to work towards. 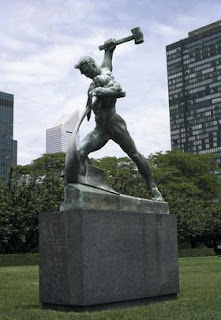 Except: that monument promoting peace has taken its motto from scripture, and it omits the most important part of the scriptural statement. It ignores the ONE responsible for that promised peace and that ONE is NOT an impersonal man-made block.

The One who will bring peace is revealed in the full text that SHOULD have been included on that monument at the UN building. And that peace will only occur when the TRUE “millennium” is established. The only one who will bring peace to this world is Jesus Christ, the Prince of Peace and He will do it when His earthly reign of 1000 years is established from His throne in Jerusalem.

Many peoples will come and say,
"Come, let us go up to the mountain of the LORD,
to the house of the God of Jacob.
He will teach us his ways,
so that we may walk in his paths."
The law will go out from Zion,
the word of the LORD from Jerusalem.
He will judge between the nations
and will settle disputes for many peoples.
They will beat their swords into plowshares
and their spears into pruning hooks.
Nation will not take up sword against nation,
nor will they train for war anymore

Now THAT is a millennium to get excited about – but the best news is that it will be only a foretaste of even better things to come.

Then I saw a new heaven and a new earth, for the first heaven and the first earth had passed away, and there was no longer any sea. I saw the Holy City, the new Jerusalem, coming down out of heaven from God, prepared as a bride beautifully dressed for her husband. And I heard a loud voice from the throne saying, "Now the dwelling of God is with men, and he will live with them. They will be his people, and God himself will be with them and be their God. He will wipe every tear from their eyes. There will be no more death or mourning or crying or pain, for the old order of things has passed away."
Posted by Onesimus at 9:59 am