I’ve been doing some reading about the history of the area where I spent my childhood. I was born in Burton-on Trent in England and for my first 13 years lived in South Derbyshire.
I was interested to come across the story of Joan Waste, a blind woman who was martyred for her faith during the reign of Queen Mary.

Even though she was blind she wanted a bible of her own, intending to find someone who would read it to her. Despite the expense she worked and saved until she was able to afford a New Testament. She then had the problem of finding someone willing to read to her on a daily basis. Eventually she found an old man in Derby jail, imprisoned for not paying his debts. He appreciated her visits and read to her on a daily basis until his health started to fail. 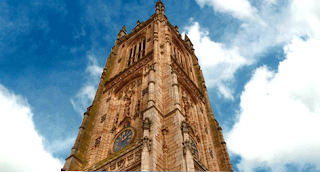 She then turned to the Clerk of All Saints Church (now Derby Cathedral) and persuaded him to read to her. When he was not available others would charge her a penny to read a few chapters. A penny was about a full days pay

Joan started memorising passages of scripture and began to speak out against false religion which abounded at the time.

Edward VI died in early 1553 and his Roman Catholic sister Mary became Queen. Almost straight away attendance at the Roman Catholic Mass was once again made compulsory and Protestantism was denounced. Joan refused to attend mass and at twenty two years of age was summoned to appear before the Bishop on a charge of Heresy.

Joan declared that she believed only the things taught by Scripture and told them was also ready to give her life for her faith rather than embrace Catholicism.

The order was given to burn Joan to death. She was taken away to a place called the Windmill Pit on the Burton Road in Derby where, holding her brother's hand, she prepared herself for execution.

She was hanged over the fire with a rope and she fell into the fire when the rope burned through.
There is a memorial to her in Birchover church Derbyshire. The place where she was executed is now the site of a Roman Catholic Church.
Posted by Onesimus at 10:31 am