4 ½ years ago I moved from Sydney to a country town 4 hours to the west. In church there was regular prayer for rain. Living in the country where farmer’s livelihoods are dependant on suitable climatic conditions it is very easy to empathise with that desire for rain. Without the rain their crops will fail, they get no income. Many have given up. Many have been forced from repossessed farms, driven into debt by years without a saleable crop.

One high profile Christian minister led nationwide prayer meetings to seek the Lord for rain. When the rain did come after one of his meetings, credit was taken for the breaking of the drought through prayer.

It is the natural thing to pray for the nation’s situation to be resolved through reliable rainfall. But while that is the “natural thing” was it the RIGHT thing to do?

Would the drought being broken bring people closer to God? Or would restored comfort mean increased complacency?

Over the last year the drought finally came to an end. Dams that had fallen to frighteningly low levels were filling. A few months ago a local dam was below 4% capacity. In recent weeks it rose to almost 60%.
Farmers were confident of their best crops ever.

Until two weeks ago! 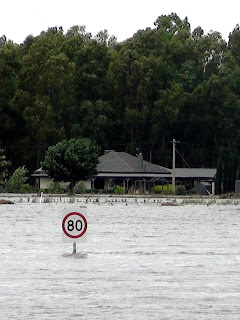 In less than two weeks there have been record rainfalls. Major dams can’t cope and are now spilling excessive water into rivers. Flooding is extensive. The combination of rain and floods has destroyed much of the “best crop ever”.

Why? Is this the answer to prayer against drought?

While considering this situation a clear phrase came to my mind:

In prayer should we be put earthly comfort first or should we take a more eternal viewpoint? What does this nation (and others) really need?

Hi Mate, Prayer is powerful but gosh...its doesn't just rain it pours..We are getting it also.. Can't complain, the tanks are full. Praise God. People do get complacent once things get better, sadly.Then they blame God...Oh my!

I agree, Prayer WITH repentance is much needed..

Maybe if repentance had preceded prayer for rain the result would have been what was really wanted - ideal crop growing conditions.

I was talking to a local fruit grower the other day. He said drought was easier for him to handle than the unseasonal rain - he had more control over the water given to his trees.

The current heavy consistant rain has spoiled most of the fruit on trees in this area.
Wet fruit is susceptible to disease and excessive ground water at fruiting time splits the fruit.